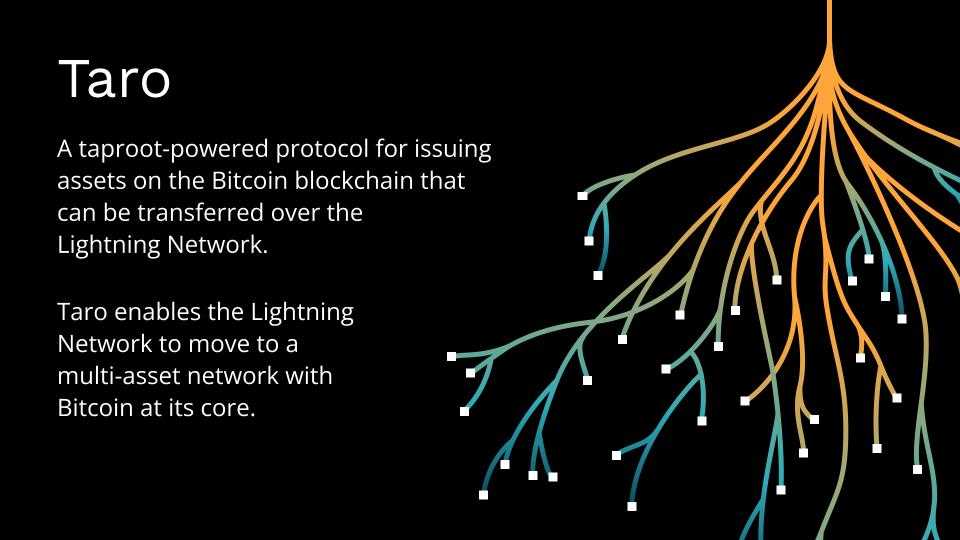 Stablecoins are coming to the Bitcoin network. Lightning Labs on Wednesday released the first version of the open source Taro software to allow the creation, sending and receiving of tokens on the Bitcoin blockchain.

Taro is a new protocol developed by Lightning Labs. It uses Taproot and the Lightning Network to create new assets based on Bitcoin and its scaling. The task of Taro is to provide the ability to issue Bitcoin-based digital and conventional collection assets (NFT). In addition, it also enables their secure transfer via the Lightning Network without bloating the blockchain. To do this, they are using the opportunities opened up by Taproot, the latest update to the Bitcoin protocol.

On September 28, 2022, Lightning Labs announced the launch of the alpha version of the Taro daemon software. This tool will allow developers to more easily “mine” (create) and exchange digital tokens on Bitcoin, such as the famous ERC-20 tokens of the Ethereum network (ETH).

For now, in this first version of Taro, the creation of tokens is done on the testnet of the main Bitcoin blockchain, but it is planned that these crypto-assets will also be able to transit on the Lightning network, in order to benefit from its quasi-instantaneous and free exchanges. And always, without intermediaries.

The Lightning Network’s second-layer solution, which runs parallel to Bitcoin’s main network (BTC), makes micro-transactions easier, thanks to the very low cost and speed of its exchanges. Bitcoin’s Lightning Network will also simplify the creation and exchange of tokens.

This new alpha version of Taro should allow developers to test applications with testnet digital assets, instead of using real BTC coins with the considerable advantage of not exposing the main Bitcoin blockchain network to any risk in this way. Projects developed in this way are then published on the main network, only after thorough testing and bug fixes.