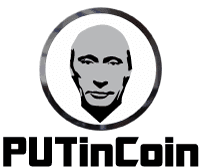 PutinCoin is a cryptocurrency that was developed to allude to the President of the Russian Federation, Vladimir Putin.

We have discovered some unusual cryptocurrencies of politicians, one of them is PutinCoin (PUT).

A combinantion of Proof of Work and Proof of stake

For some crypto enthusiasts, PUT is to be a parody of TrumpCoin. For others, it  is a genuine tribute to the Russian president, Vladimir Putin. When Russia invaded Ukraine in 2022, this crypto surged by about 700%.

According to Coinmarketcap, the Putin coin is a cryptocurrency coin created to pay tribute to the people and the president of Russia. It was created and developed with the intention of supporting the vastly growing Russian economy, the market around it and even the economy across the Russian boarders.

In other words, PUTinCoin (PUT) is a a fan coin dedicated to Russia to support the fast growing Russian fan community within the country and beyond its borders.

The Putin coin cryptocurrency is decentralized and uses Proof of Work as well as Proof of stake. This combination of features makes Putin coin one of a kind and therefore an investment opportunity that is highly beneficial.

Users are able to generate PUT through the process of POS – mining by downloading the node wallet.  It is currently trading on 2 active market(s) such as SouthXchange.