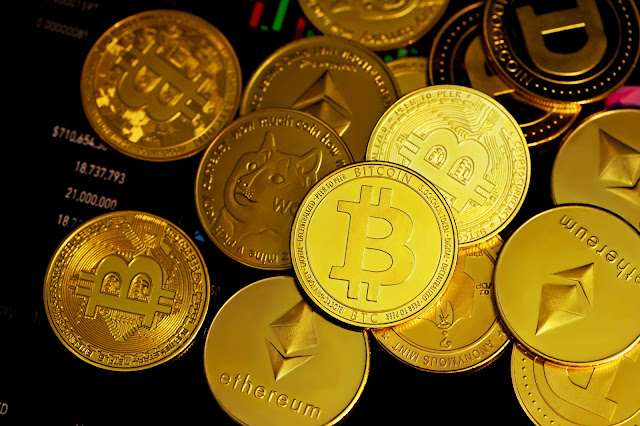 The world of cryptocurrency continues to grow. It is important to master the associated vocabulary. Most of the confusion surrounding cryptos is due to a lack of understanding of the jargon used in this universe.

In order for you to get started, or at least exchange on the subject, here are the common words in crypto, to better understand the uses and investment practices associated with digital currencies.

The first decentralized digital currency, currently the best known and most expensive;

A digital asset created to function as a currency, using cryptography to secure its transactions, to control the creation of other units of that currency, and to verify the transfer of assets.

As its name suggests, a wallet is a digital wallet that allows you to secure cryptocurrencies. It is composed of a public and a private key.

For the average person, the concept of a wallet is already a given and, good news, it doesn’t really vary when it comes to crypto. In fact, the wallet is where all of a person’s cryptocurrencies are stored. The security of a virtual wallet is so high that it’s impossible to recover an account if a password is lost.

To take it a step further, there are two types of wallets: hot and cold. A hot wallet is connected to the Internet and, although it facilitates transactions, it is more at risk. On the contrary, a cold wallet is more like a safe. It is kept offline and only the owner can access it.

Altcoin refers to an alternative cryptocurrency, other than Bitcoin.

A private key is composed of a sequence of numbers in the same way as a public key. The private key is used to sign transactions when sending cryptocurrencies. It is the key that guarantees access to funds.

A public key is materialized by a sequence of numbers or a QR code. It is called an address. The public key allows you to receive cryptocurrencies. It can be compared to an IBAN.

Unlike traditional cryptocurrencies, whose price is volatile and can change suddenly, up or down, stablecoin relies on the stability of its price by being backed by fiat currencies, i.e. currencies whose value comes essentially from the fact that a state imposes its legal tender on a given territory, such as the euro, the US dollar, the Chinese yuan, the Japanese yen… Tether is an example of a stablecoin because this crypto asset is backed by the US dollar.

Mining is the process of creating new bitcoins. The person doing the work, the miner, works with powerful computers that are able to solve very complex mathematical formulas.

The computers used in the mining process create new blocks for the blockchain. The process also involves the addition of particularly advanced security measures that are designed to protect the transactions.

ATH (All Time High) refers to the highest price of all time that an asset has reached in a given market.

The purchases or sales of a whale in a market can significantly impact a market. Indeed, if the transaction is major, there can be several negative effects, such as limiting the number of holders of a digital currency due to control by a single actor. Nevertheless, whales are the most valuable cryptocurrency addresses since they have a large enough impact to influence the value of a currency.

After acquiring this new knowledge, the question is on everyone’s lips: who is the inventor of the most popular cryptocurrency – bitcoin? Unfortunately, you won’t find out today, as it is still an unknown information for everyone!

Indeed, no one knows for sure who the person or group of people who created bitcoin is. Satoshi Nakamoto is the pseudonym that has been used to designate the inventor. Moreover, although several people claim to be Nakamoto, none of them has managed to convince the cryptocurrency world.

A bear market refers to a market with a downward trend.

A bull market refers to a market with a bullish trend.

A bullrun is the period characterized by a sharp rise in the price of assets in a market.

The acronym: DeFi (Decentralized Finance) stands for decentralized finance. As its name suggests, DeFi represents a financial world that does not require a trusted third party to operate. DeFi first appeared on Ethereum and is now present on many other blockchains.

Hold: strategy aiming at keeping one’s assets on the long term regardless of price fluctuations (rise/fall).

The Proof of Stake (under the initials “PoS”) is a consensus protocol used in the operation of a blockchain.

Its principle is to encourage network users to block their tokens in order to secure the network. In exchange, these same users are rewarded with a portion of the new tokens issued.

The Proof of Work (under the initials PoW) is a consensus protocol used in the operation of a blockchain.

It is notably used for Bitcoin. The PoW brings together different actors called miners, who perform mathematical calculations via machines in order to validate the transactions in each block. In exchange for their work, the network rewards the miners with new tokens.

“To earn $X worth of cryptos without spending a dime, just sign up for this app”. If it sounds smoky at first, this practice is common in the crypto world. It’s called an air drop, and it’s a free distribution of small amounts of cryptocurrencies by a company that wants to expand its user base.

The latter can either resell them immediately or keep them in the hope that their price will rise. But beware, sometimes the crypto that has been airdropped is only conditionally exchangeable and the expected value has drastically dropped at the time of conversion.

The practice of the coin burn consists in voluntarily destroying tokens. This system regulates the amount of digital currency in circulation. Unlike Bitcoin, which is limited to 21 million units in circulation, a crypto like Binance Coin (BNB) can be issued without limit.

The value of a unit can therefore eventually be greatly devalued. This is why the Binance platform uses quarterly coin burns. During the last burn, which took place on October 18, 2021, 1,335,888 BNB (BNB is an alcoin) were destroyed, or more than $639 million.

Literally “gas fees”, gas fees are commissions taken from each transaction and which are paid to the miners. The price of these fees is expressed in gwei or giga-weis. In the real world, the gas fee can be likened to a toll booth.

It is systematic for transactions that rely on the Ethereum blockchain. Since this crypto is reliable and popular, miners are overwhelmed by requests for transaction validation. The high amount of gas fees therefore regulate the demand, excluding some people.

Rug Pull is the practice of abruptly withdrawing all of one’s assets from a liquidity pool or smart contract in order to manipulate the price of a currency. This is a tried and tested manipulation in traditional finance that is now found in DeFi, or more clearly, the decentralized financial system.

These computer programs allow to execute predefined instructions on blockchains like Ethereum. Smart contracts are one of the links in the DeFi, the decentralized finance of digital infoworlds.

Staking is a mechanism that consists of isolating funds in order to participate in the security of the network. It is a way of feeding the validation operations that take place on a blockchain. The word stake refers to the bet.

A person can therefore lose this stake if the validation operation does not go well, which encourages sound practices. Since it does not require investment in hardware (graphics card, power supply, etc.) and consumes less energy, staking is presented as an alternative to mining. The validation operation is referred to as proof-of-stake (PoS).