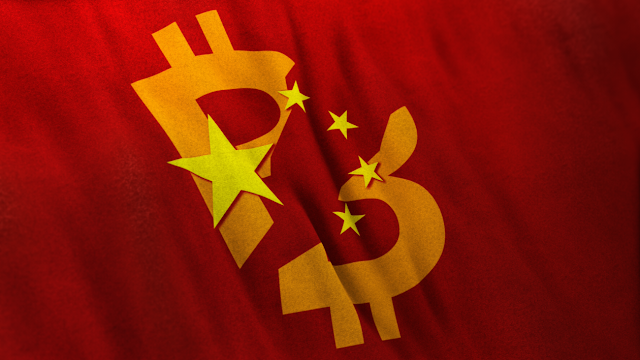 China : Bitcoin is a Ponzi schemes with different levels of risk depending on market capitalization and number of users.

Do you hate Bitcoin and cryptos?

Despite this commendable resilience, China’s state-run media outlet Economic Daily believes that the current bear market could spell the end of Bitcoin and send its price into the black.

Indeed, since 2021, China has adopted a very hostile policy towards cryptos as it develops its own central bank digital currency, e-CNY. In 2021, the country first banned cryptocurrency mining, and then decided to ban all cryptocurrency transactions.

And today Beijing continues to push for this.

The South China Morning Post, a media outlet directly controlled by the Chinese Communist Party, opened hostilities last week by warning investors that the value of Bitcoin will continue to decline and that the cryptocurrency will eventually become worthless.

Bitcoin is nothing more than a digital blockchain, and its returns come mainly from buying low and selling high,” the paper said. “In the future, once investor confidence collapses or when sovereign countries declare bitcoin illegal, it will revert to its original value, which is completely worthless.

Now it’s the People’s Daily’s turn to try to finish off what’s left of hope in the Chinese crypto community. Do you hate Bitcoin and cryptos? Know that you are not alone!

The Economic Daily also reported that the crypto market is rife with fraud, manipulation and pseudo-technical concepts and should be banned globally.

The article was written by 2 leaders of the Blockchain Service Network (BSN), Shan Zhiguang and He Yifan. They are the chairman and executive director of the project, respectively. BSN is a national blockchain project developed and managed by the central government. In this article, the authors remind us how risky and dangerous the crypto market is.

It starts with the terraUSD debacle to justify Beijing’s crypto ban with an endorsement of u post on Twitter :

It took him 1.5 years to convince his wife to put their entire $1 million fortune into LUNA. Result: he lost 98% in a few days, and he doesn’t know how to face his wife and his future life.

Then the article tries to support the idea that bitcoin is the biggest ponzi scheme in human history.

Interviewed by CoinTelegraph, the authors of the article criticize El Salvador’s decision to adopt bitcoin as its legal tender:

[These countries are] in serious need of basic financial training. (…) They are putting whole countries at risk, unless their initial intentions are (…) to defraud their citizens.

Indeed, for these journalists of a day, cryptocurrencies would be:

Ponzi schemes with different levels of risk depending on market capitalization and number of users. (…) I don’t touch them, and I won’t touch them in the future. Even if they become regulated, because I don’t consider them to have any value.

However, China’s efforts to ban cryptocurrencies have proven futile as the country has once again become the second largest contributor to Bitcoin’s hash rate after the United States.
In addition to the clear evidence of mining ban violations, the latest report suggests that drug dealers are using cryptos more in China.
In fact, according to the South China Morning Post, although China has banned cryptocurrency activities, enthusiasts have found ways to circumvent the ban. The Hong Kong media cited the example of the OKX platform, a cryptocurrency exchange with 9% of its web traffic still coming from China.
The business daily, which is a propaganda tool of the Chinese authorities, is now embroiled in the latter’s fight against cryptocurrencies.
Its analysis of the current bear market is clearly aimed at convincing local investors to dump their Bitcoin positions. It could also be a tactic to encourage them to switch to digital yuan.