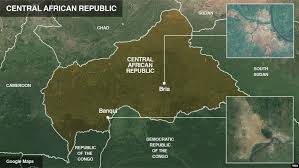 Has El Salvador set an example for other countries? In fact, on September 7, 2021, El Salvador and its President Nayib Bukele launched a movement that is set to grow: recognizing Bitcoin (BTC) as legal tender.

El Salvador was the first country in the world to legalize the use of Bitcoin. Now, it is the Central African Republic that is embarking on this economic and monetary revolution.

The parliament, meeting in plenary session on Thursday, April 21, 2022, unanimously adopted by acclamation the draft law governing cryptocurrency in the Central African Republic. This project allows the government to create a favorable environment for the financial sector in the country.

The draft law was transmitted to the office of the National Assembly which, pursuant to the provisions of Article 32 of Organic Law No. 17.011 of March 14, 2017, on the Rules of Procedure of the National Assembly and after declaring its admissibility, entrusted its substantive examination to the Joint Committee on Economy, Finance and Planning/Equipment and Communications chaired by the Honorable Guy Samuel Nganatoua.

From the examination of the motives, it appears that this bill in the plan of recovery and consolidation of peace in the Central African Republic, the Government has planned to achieve a strong and inclusive growth for the benefit of development. To frame this phenomenon, the Minister of Digital Economy, Posts and Telecommunications and the Minister of Finance and Budget, have submitted this bill establishing a legal framework, governing in the Central African Republic, cryptocurrencies including Bitcoin.

For the Minister of Digital Economy, Posts and Telecommunications, Justin Gourna Zacko, the objective is first to define a legal framework for cryptocurrency. But beyond that, he wants the establishment of a favorable environment for the financial sector.
Tax contributions will be able to be paid in cryptocurrencies through platforms recognized and authorized by the Government. In addition, any economic agent is required to accept cryptocurrencies as a form of payment when they are offered for the purchase or sale of a good or service. And all violators of the provisions of this law will be possible of a firm prison sentence of 20 years, accompanied by a fine of between 100,000,000 to 1,000,000,000 CFA francs.
Minister Justin Gourna Zacko added that investing in cryptocurrencies has many benefits for millions of users. Cryptocurrencies also have a high volatility that should not be lost sight of because it is an important investment. The decentralization of digital currencies relies on the inviolability of transactions stored through the BlockChain.

With cryptocurrency, there is no more control of the Central Bank. You have your money, you send to an investor for a business, you receive it in any currency, you can dispose with it in Dollar, Euro, CFA, or Naira.