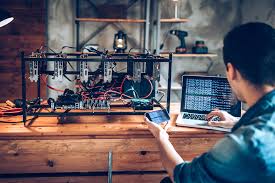 The cryptocurrency market has had a major influence on miners’ earnings. The peak of daily revenue generated over the past year has exceeded USD 70 million.

The last halving behind the scene

The daily earnings generated from bitcoin mining related to the rewards of mined blocks have remained below USD 30 million in the last four weeks.

According to data provided by the website Braiins, miners have experienced a decline in earnings in recent weeks. Although the rewards in BTC per mined block have remained at 6.25 bitcoins since the last halving.

Over the past twelve months, the highest point reached by bitcoin mining in terms of daily USD revenue generation was 72.66 million at the end of October 2021. Meanwhile, so far in 2022, the highest profit that BTC mining has ever reflected in a day was $51 million.

The main reason for the decline in bitcoin miners’ income is the falling market. If we take as a reference the graph showing the movement of the market price of BTC and that of the daily earnings in USD generated by bitcoin mining, the relationship between the two values becomes clear.

Unlike the movements of the crypto market, values such as the mining power of the Bitcoin network and its difficulty of mining did not play a crucial role in the decline experienced by BTC miners. However, both the hashrate and difficulty of Bitcoin may influence whether or not the market’s effects on miners’ earnings intensify.

Hypothetically, a massive influx of miners or a drastic increase in the mining power of the existing Bitcoin network workers could help to momentarily offset the low revenue generated by this activity. However, as soon as the network automatically adjusts for difficulty, block production will return to normal, as will average daily earnings in USD.

As long as the market price of bitcoin does not increase, the daily USD revenue generated by bitcoin mining rewards will not increase much.

The hashprice indicator is still below levels

Fortunately for miners, the rewards for mining a block on the Bitcoin network always generate the same amount of BTC, regardless of the Bitcoin market price.

A popular saying in the Bitcoin community is “1 Bitcoin equals 1 Bitcoin,” which refers to the fact that the true value of Bitcoin lies not in its price as a product of currency speculation, but in what it represents as a technology and an ideal.

Faced with the current bear market’s relentless assault on the price of bitcoin, miners have found it necessary to refine their strategies to stay active.

The profitability of bitcoin mining, while at a relatively low point, has reached some level of stability.

However, it would not be entirely accurate to consider that the profitability of mining has reached a stable point. According to Paulino Rossi, CEO of Argentine cryptocurrency mining company SouthMining.Capital, the hashprice indicator “is still below levels that can be considered normal.”